Survival stories of people who have managed to flourish in their host country despite their past wounds and suffering.

Angelica*, a Colombian refugee living in Venezuela, normalized the gender-based violence of which she was a victim for a long time. Her ex-partner threatened her with killing both of them if Angelica dared to leave.
© UNHCR/Claudia Vielma

“I see myself in other women in my community; in their eyes, I recognize mine. When I approach them, they fall apart, I support them, and there I find my strength not to fade. As a community leader, I fight to get them out of that situation because I save myself day after day by saving them.” This is a fragment of the testimony of Mariana*, a Colombian refugee who fled her country of origin after surviving gender-based violence.

Within its mandate, UNHCR, the UN Refugee Agency, with the help of its partners, has been implementing social programs that respond to the needs of refugees, asylum seekers, stateless and internally displaced people who survived violent attacks. Through the Safe Spaces Network, case management in Latin America and information on sexual and gender-based violence and child protection have been strengthened.

Like Mariana, the brave voices in this photographic series entitled “Blooming” have survived abuse. Overcoming adversity, they started a new life in Venezuela. Their resilience and strength should be an example to us all. 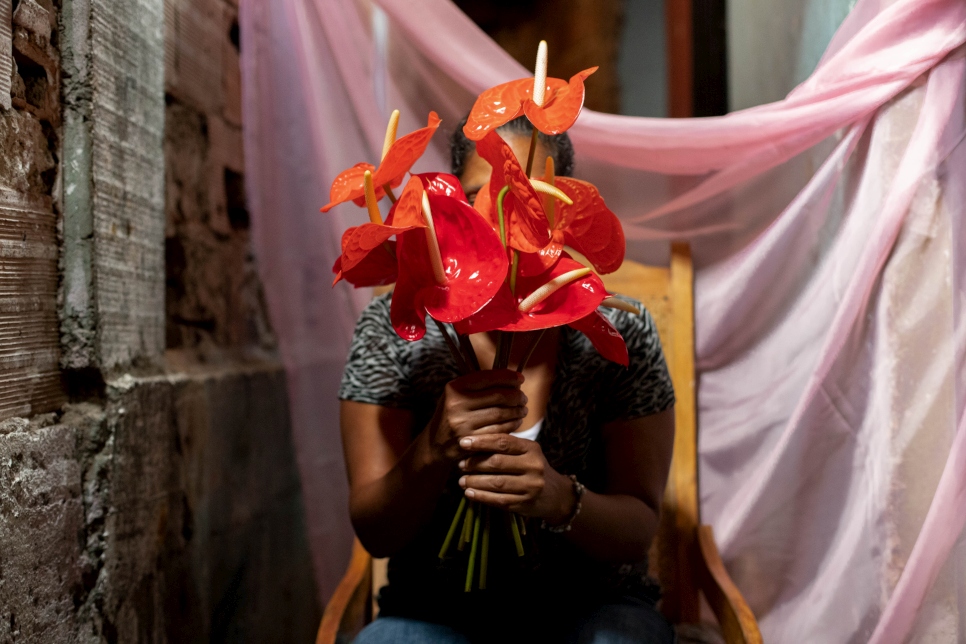 Mariana*, a Colombian refugee, fled her country of origin after surviving to gender-based violence, leaving behind days and nights where she could not leave her home for fear of being found by her ex-partner.  © UNHCR/Jeanneizy Garcia

Mariana, a Colombian refugee, fled her country of origin after surviving to gender-based violence, leaving behind days and nights where she could not leave her home for fear of being found by her ex-partner and the pressure from the irregular armed groups controlling her hometown.

Mariana relates that she needed a lot of strength and self-love to get out of that violent relationship. One night after being injured to lose consciousness, she woke up sobbing and decided to get up and flee without looking back. She lived with the fear of loosing her life day and night.

“I would lie on the floor of my living room at night with the lights off, and I could see shadows of feet walking around my house; it was the guerilla. Then when I woke up, I realized that my life was still in danger; my ex-partner was outside waiting for me to open the door. I remember that he would chase me wherever I went.”

Once safely in Venezuela, she flourished, started a family, and integrated into his host community by joining the community promoters supported by UNHCR.

“I focus on my children and on helping people...giving love to others and feeling their gratitude takes me out of what I've lived; it gives me enough reasons to smile and continue.”

Mariana, with tears in her eyes, expresses how important it is for her to have a leadership role in her host community where day after day she focuses on supporting those who need it most. She wants to become the light in the darkness of someone, such as UNHCR was her anchor in her most vulnerable moments. 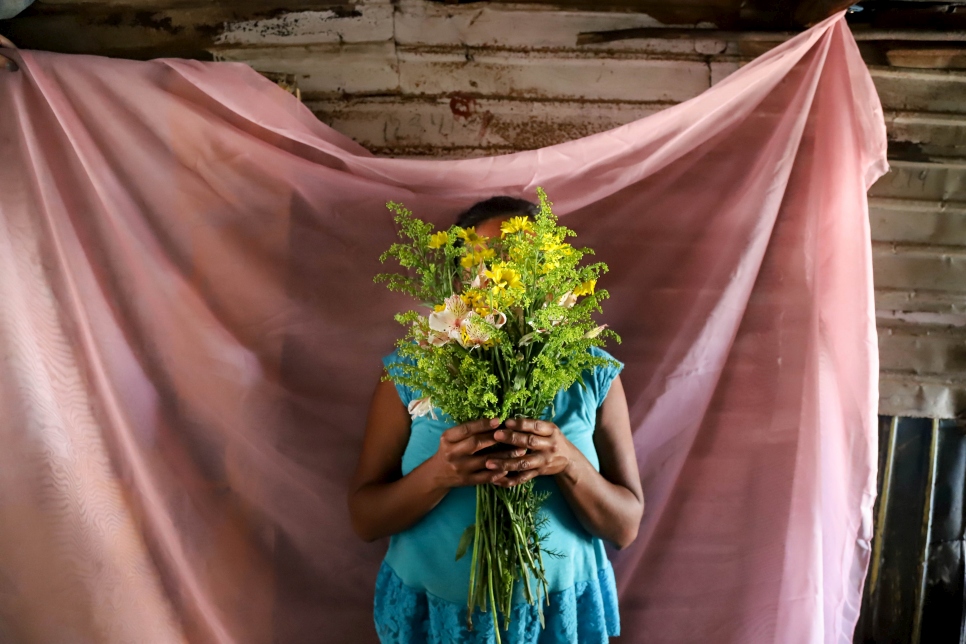 Angelica*, a Colombian refugee living in Venezuela, normalized the gender-based violence of which she was a victim for a long time. Her ex-partner threatened her with killing both of them if Angelica dared to leave.  © UNHCR/Claudia Vielma

“I remained 15 years in a relationship where I was morally and psychologically abused constantly by my partner without being aware of it. He limited the times I saw my family, restricted me from going out with my friends, and controlled the way I dressed.”

Angelica*, a Colombian refugee living in Venezuela, narrates how she normalized the gender-based violence of which she was a victim for a long time, knowing nothing different and not receiving any support from her family. There were years and years of abuse where her ex-partner threatened her with killing both of them if Angelica dared to leave.

Angelica tells us that when she started to study, she realized that her husband's behavior was violent and that there were relationships where love was not what she had experienced. She came to realize that his partner's behavior had become violently radicalized over time, and she was finally able to realize the danger she was in.

“One day, I came back from my classes and found all my tuition payment receipts broken on the floor by my ex-partner so that I couldn't prove that I paid my classes and had to quit my studies. That was the moment when I said enough is enough and decided to leave him. “

Angelica after being constantly persecuted and threatened by her ex-partner, she finally fled Colombia, managing to leave that painful chapter of her life in the past for herself and her children.

“I smile, knowing that this pain is in the past and that today I can be myself without any limitation, I can make my own decisions. I am the owner of myself; I am free.” 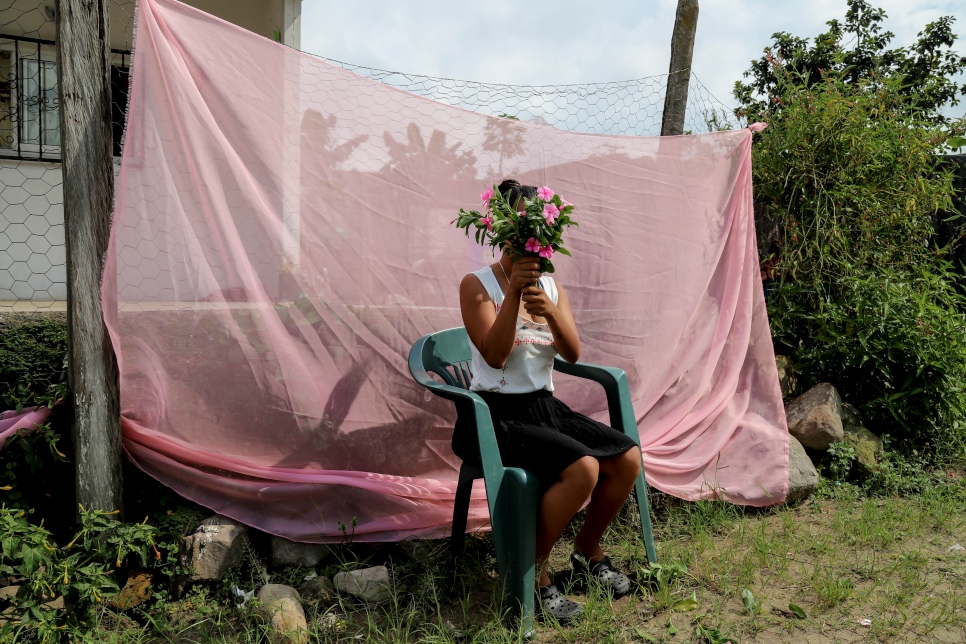 Luisa*, an asylum seeker in Venezuela, decided to leave her home behind to find safety somewhere far away.  © UNHCR/Hugo Quintero

“I lived in a beautiful area of ​​Colombia; I remember being surrounded by flowers and that everything was peaceful. However, one day some armed men arrived, and my landscape was filled with fear and uncertainty.”

Luisa*, an asylum seeker in Venezuela, tells us how fear came to her door to change her mother's life and hers forever. One day some men came to her neighborhood who looked at her threateningly, filling her with panic every time she left her house. The fear grew exponentially after finding out what was happening to other girls on her street, where she spent nights and days wondering if one day they would leave and everything would be normal again.

“One day, when I was out of my house, a man surprised me and raped me. My life has never been the same since then. I could not understand how someone could do so much damage and let me live with it.”

With her mother, Luisa, afraid of seeing that man return, decided to leave her home behind to find safety somewhere far away. She found refuge in religion which gave her the strength to move on. With the psychosocial support obtained through one of UNHCR´s partner organisations, Luisa has grown away from pain, moved on, and appreciated that she is alive every day.

The story of Luisa's bravery is there to show us that the risk of facing gender-based violence is beyond known circles: “one day, the danger can take us and change our lives, demanding a lot of strength to stand up, move on, and be survivors.”

“The church has given me strength to look back and consider myself a survivor.” 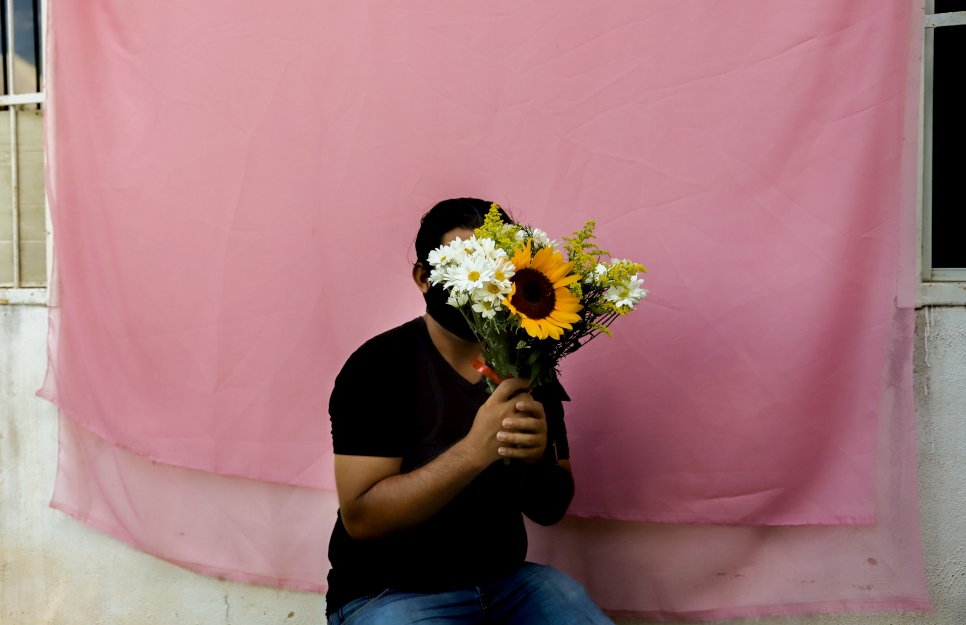 Carlos*, a homosexual man, has been discriminated by his family and friends, feeling alone and completely isolated for an extended period of his life.  © UNHCR/Kelvin Tossaint

“From a very young age, I knew that I was different from other children in my community. I did not have the same sexual orientation as my peers, and I did not like the same things they did. However, the first discrimination came from my family; my parents did not accept me as I am.”

This fragment belongs to the life story of Carlos*, a homosexual man who has been a survivor of rejection and discrimination in all the areas of his life. He has been discriminated by his family and friends, feeling alone and completely isolated for an extended period of his life. Carlos also highlights that it has been difficult for him to integrate into his community due to the numerous rejections he has received while pursuing jobs because of his sexual orientation.

Carlos is part of the LGBTQIA2S+ community and has been a survivor of gender-based violence. He is currently the only man to be part of the Women's Network in his host community. He strengthens his communication and leadership skills by helping others in vulnerable situations to be recognized as an equal.

“We can move forward no matter the circumstances. If we are going through difficult times, we must seek help; because belonging or having sexual differences does not mean we should allow or be subjected to abuse. We are the same. We have the same value and dignity as heterosexuals.”

Carlos's story shows us that gender-based violence can manifest itself in different ways and affect both women and men. It also highlights the importance of seeking support from others and of valuing all people equally.

“We should learn on others to find the strength we need to get up and continue.”

*Names have been changed for protection reasons.

Blooming is a photographic series developed by UNHCR, the UN Refugee Agency, in Venezuela, for the 16 Days of Activism Against Gender-Based Violence.