To celebrate International Day of the Girl, the Spanish footballer, who is a supporter of the United Nations Refugee Agency, paid a visit to the women's team of A.E. Ramassà, a football team that promotes the integration of refugee, asylum-seeker and migrant women in Spain through sports. 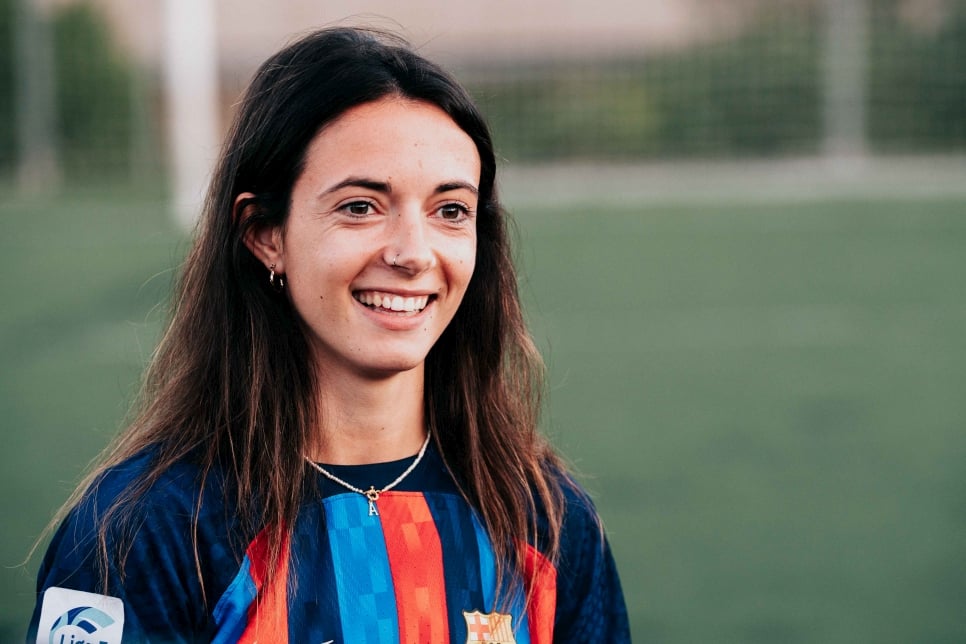 As part of the alliance between FC Barcelona and UNHCR, Aitana Bonmatí had a meeting with the inclusive women's team of A.E. Ramassà.  © UNHCR

As part of the partnership between FC Barcelona (FCB) and UNHCR, the United Nations Refugee Agency,  Aitana Bonmatí met the A.E. Ramassà women's team, a  team of 35 women refugees, asylum seekers and migrants.

This team, that began their training sessions in Barcelona in May 2021, counts on the support of the FC Barcelona Foundation and its goal is promoting the integration of refugee women of different nationalities, ages, and backgrounds, building a support network and personal links through football, with the SportNet methodology developed by the FC Barcelona Foundation and that uses sports as a tool for change.

Aitana, nominated for the second consecutive year for the prestigious Ballon d'Or award and the only Spanish player in the European Championship team of the tournament, had a meeting with the AE Ramassà team. The players told her how sport helps them forge new friendships and plays a role in their integration process in Spain. "I like it because I have made friends and I can talk to them. Playing football cheers me up and I have more energy after training, and playing and after talking to other women like me," said Svitlana, a refugee who arrived in Barcelona in March, fleeing the war in Ukraine.

Fereshteh, a refugee journalist from Afghanistan, also spoke of the positive effects that sport has on both their physical and mental health, generating personal links between them: "Playing football with Ramassà has two effects for us: First, it helps us to integrate with the local community in Spain. Secondly, we know that we are not alone in Spain. We are all refugees here, with similar problems and challenges".

The FCB midfielder also discussed with the AE Ramassà refugees about the challenges and barriers that women face in the sports world, as well as in many other social contexts: "I know that all of you have had to go through difficult paths. In the end, we are all women, and we have many challenges along the way, but we deserve the same rights as well as global leadership also to lead the world", said Bonmatí.

During the meeting with the football team, Aitana wore the new FC Barcelona jersey featuring for the first time the UNHCR logo on the FCB men's and women's first team jerseys.  The new t-shirt sends a message of solidarity towards the more than 100 million people who have been forced to flee their homes.

In the context of the partnership, FC Barcelona Foundation is contributing €400,000 per season towards four UNHCR projects in Colombia, Uganda, Türkiye, and Malaysia (€100,000 per project). In addition, it will make in-kind donations (valued at €100,000 per season) of FC Barcelona sporting equipment, as well as offering the experience and knowledge of the foundation’s sports experts.

The Barça Foundation was launched in 1994 to support the children and youth of the most vulnerable social groups through sport and education in values, with the objective of contributing to a more just and inclusive society. The Barça Foundation frames its activities within the UN programs Sport for Development and Sustainable Development Goals.

The main action lines are educational access and support, violence prevention and conflict resolution in childhood and youth and combatting social exclusion and discrimination. Today, the Foundation reaches  more than 1.5 million beneficiaries around the world.

UNHCR, the UN Refugee Agency, is a global organization dedicated to saving lives, protecting rights, and building a better future for people forced to flee their homes because of conflict and persecution. We deliver life-saving assistance such as shelter, food and water, help safeguard fundamental human rights, and develop solutions that ensure people have a safe place to call home. We work in 137 countries, using our expertise to protect and care for millions of people.

Associació Esportiva Ramassà is a football  club and NGO in the municipality of Les Franqueses del Vallès (Barcelona). In addition to the inclusive team for refugee, asylum-seeking and migrant women, the organization also coordinates a soccer-based development project in Cameroon , as well as awareness-raising activities in schools and companies in Spain. These projects aim to promote peace, gender equality, and access to education, using sport as a tool for social transformation.