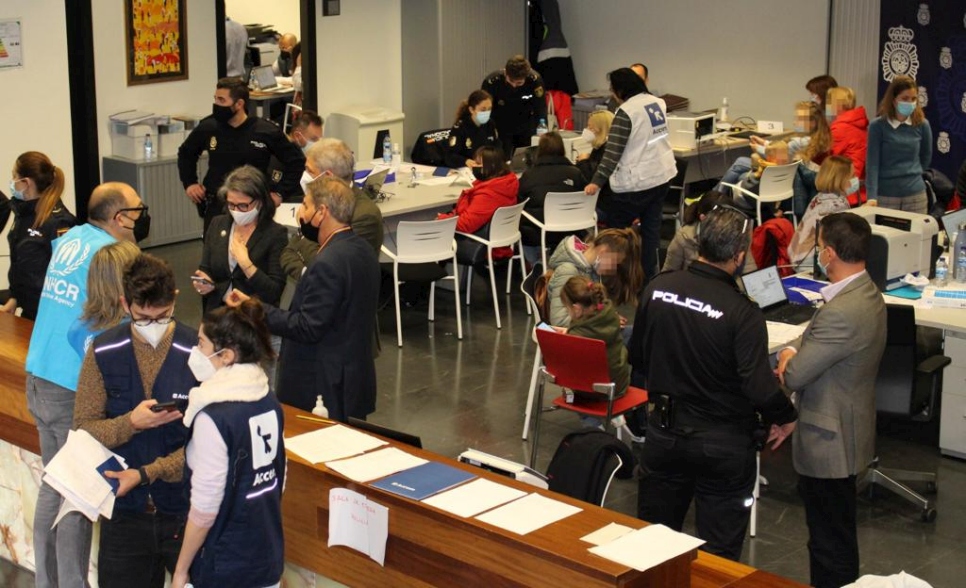 The UN Refugee Agency welcomes Spain's extension of the Temporary Protection Directive, unanimously agreed at the European Union (EU) Council of Home Affairs Ministers on 4 March, with the aim of protecting and documenting people fleeing the conflict in Ukraine.

The Temporary Protection Directive, which is being activated for the first time in the EU since its approval in 2001, allows access to immediate protection and grants work and residence permits to Ukrainians, stateless persons and third-country nationals with legal residence in Ukraine who cannot return to their country.

The Spanish government has also decided to extend the scope of Temporary Protection not only to persons of other nationalities or stateless persons who were legally residing in Ukraine before 24 February, but also to Ukrainian citizens in Spain. These are Ukrainians who had arrived in Spain before the start of the conflict or were in an irregular situation here, including rejected asylum seekers, and those who, as a result of the conflict, cannot return to Ukraine.

"The government's response is very positive because it is not only protecting Ukrainians but also other people fleeing Ukraine who need protection," said UNHCR’s Representative in Spain Sophie Muller.

Since last Thursday, the first reception, care and referral centre (CRAD) set up by the Ministry of Inclusion in the Madrid town of Pozuelo de Alarcón has served several hundred people, who in just a few hours have already received the first temporary protection documents from officials of the Ministry of Interior, Police and the Asylum and Refuge Office.

They are mainly families headed by single women with children or single young women who were able to reach the border countries after fleeing the conflict and who have arrived in Spain through friends and relatives. For this reason, UNHCR highlights the importance of an adequate approach to age, gender and diversity in reception and care, as well as the need to reinforce the coordination of all actors for the design of protection mechanisms adapted to their needs.

"My mother came to Spain to support us with the birth of my daughter and the outbreak of the conflict has caught her here, but my father and brother are still trapped in Ukraine; we don't know when they will be able to leave," says a young Ukrainian woman whose 63-year-old mother was the first refugee to receive temporary protection documentation. Since its opening on 10 March, the Ministry of Interior has documented some 800 refugees with temporary protection for one year.

A UNHCR team is providing information, guidance and support with interpreters at this centre in Pozuelo managed by the NGO Accem, which coordinates the reception and referral work for those in need of accommodation in Spain.

"The work being done in this CRAD, integrating legal protection services, documentation, special needs screening, reception and referral, is excellent practice", added Muller who has visited the centre on several occasions and supervises the work of the UNHCR team.

The Spanish government has announced the opening of other similar centres for people from Ukraine in Barcelona, Alicante and Malaga in the coming days. Likewise, the Ministry of the Interior informed that, in other cities, the National Police stations where immigration and international protection procedures are usually handled, will also process temporary protection documents.

The Temporary Protection status is intended to be activated in situations of a mass influx of foreign nationals to an EU country, especially for reasons of war, violence or human rights violations. Temporary Protection makes it possible to simplify and streamline procedures for documenting and providing international protection to people in need of it as much as possible, without collapsing the asylum systems of the receiving states.

- Portal of the Ministry of Inclusion, Social Security and Migration for refugees from Ukraine: https://www.inclusion.gob.es/es/ucrania/index.htm

- UNHCR HELP Portal with information on the relevant situation in Ukraine and the outflow of Ukrainian citizens: https://help.unhcr.org/spain/ukraine-relevant-information/

- UNHCR's information on collaboration with the Ukraine crisis

- UNHCR data portal on the crisis in Ukraine: https://data2.unhcr.org/en/situations/ukraine