Tetiana left Ukraine to get her daughter to safety from the war. Now she works as an interpreter with UNHCR to help others who, like her, are seeking protection in Spain.

"As interpreter and translator, Tetiana helps those looking for protection in Spain.
© UNHCR/Bianca Rus

Tetiana, an English philologist and Hispanist, is Director of Spanish Language and Culture at the Polytechnic University of Dnipro, Ukraine. She left her city in mid-March to get her daughter to safety from the war and chose to come to Spain because she knew that her knowledge of the language and the culture would not only make the road to exile easier for them, but also for many other people she now helps as a UNHCR interpreter in Alicante. She is so closed to the Spanish culture, that his gastronomic tradition already includes potato omelette and Galician zorza, and whenever he travels to Madrid he always takes a selfie with Calderón de la Barca in the Plaza de Santa Ana. From the Centre for Reception, Attention and Referral of the Ministry of Inclusion (CREADE), managed by the Red Cross in Alicante, Tetiana works with the UNHCR team to provide translation and interpretation support to refugees from Ukraine who apply for temporary protection. A status that now also protects her and her daughter Marina.

Tetiana spoke to María Jesús Vega, UNHCR spokesperson in Spain, and these are some extracts from the online interview:

Tell us, why you chose to come to Alicante?

I have a very strong bond with Spain because of my profession and in Alicante I have a very beautiful friendship with two university professors who have been colleagues of mine, María and Mar. We have been working together for many years and we are united by our passion for teaching Spanish, for Hispanism, whatever our nationality. There is a song that says, "thanks to life that has given me so much", and I would change the lyrics to say, "thanks to life for having put María and Mar on my path". But I am also short of words to thank the support of the Cervantes Institute and many colleagues in Spain who raised funds to help many teachers to leave the country. Everyone has ensured that I have not felt alone for a minute since I arrived here. When the war broke out, I had more than 100 messages on my mobile every day, all concerned about how my family, and I were doing. I almost didn't even have the strength to reply, but I always replied to them because they were so worried.

What make you decide to leave Ukraine?

We lived in Dnipro, in the centre-east of the country, and the front line was just over 100 kilometres away. My parents, my husband and my whole family are still there. My house is near the airport that was bombed more than five times; not even the asphalt is left. Many displaced Ukrainians came to the city to seek refuge or to spend a few days while they continued their journey west. My daughter's school became a reception centre and all the neighbours brought mattresses, blankets and whatever they had to help the displaced. I believe that no child should have to live in fear of the air alerts, scared because at any moment war could come to the city. We didn't want my daughter to go through that and I think she has had enough of living it from a distance. We live the war wherever we are, because we carry it inside us. 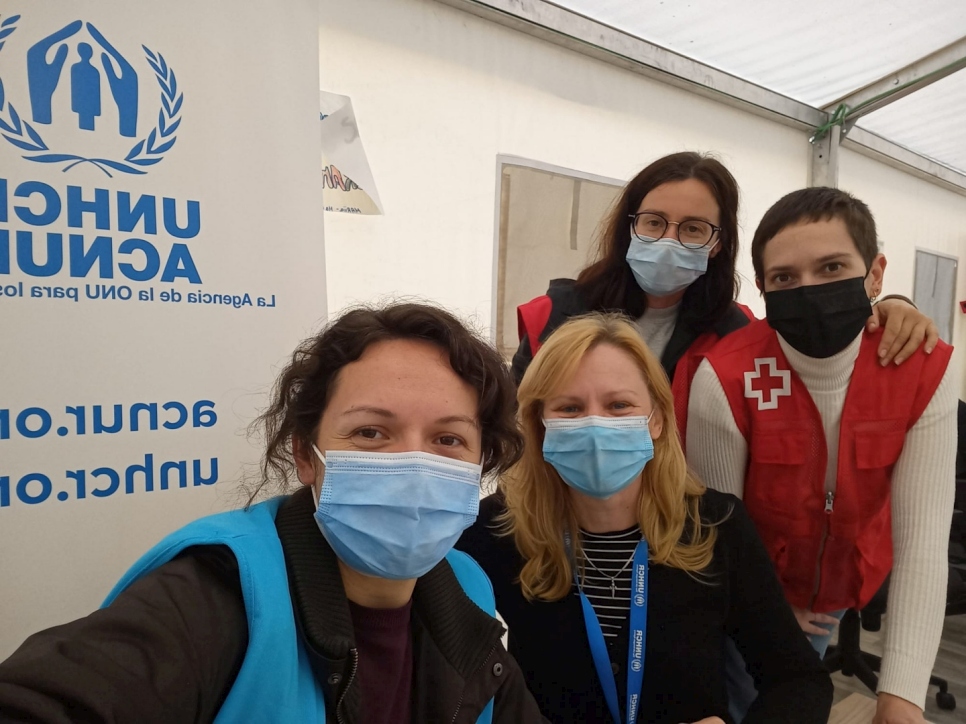 Tetiana (centre) together with the Red Cross and UNHCR's teams at the Reception center (CREADE) where she works in Alicante, Spain.  © UNHCR/Bianca Rus

How is your day to day now in Alicante?

Well, I'd say I'm almost short of hours a day to do everything I want to do (he laughs). I live far away and I have a three-hour round trip to get to the City of Light where CREADE is located. There I work as an interpreter with the UNHCR team. When I return home, I give online classes with the students at my university because many have expressed an interest in continuing with the classes, and then I also dedicate a little time to my daughter Marina, who is 14 years old, so that she can learn Spanish. She knows something because, when she was little, we used to sing songs in Spanish and that's how she learned to count, the days of the week and basic things. Marina is still taking online classes with her high school in Dnipro so that she doesn't miss the course and, if we can't return to Ukraine in September, I will enroll her in a high school in Alicante. And then ... shopping, preparing food, housework, taking care of the plants and at weekends, I collaborate as a volunteer interpreter with the Generalitat Valenciana, doing translations for their website and a thematic vocabulary.

What do you value most about your work as an interpreter with UNHCR?

What I like the most is the possibility to help people. I speak Spanish, I have visited this country many times, but even so, it is difficult for me to go through this situation, so I can imagine how difficult it is for them. Many refugees come with a blank stare, confused. The UNHCR protection member, Bianca, explains to them what temporary protection means, what rights they have, what they can and cannot do, and I translate. The truth is that their faces change; they leave with information, calmer, knowing where to go. Even if my part is just to translate, we have a good rapport and I feel part of the team; I explain to them how to scan the QR code on the UNHCR information Help portal in Ukrainian, I encourage them not to be ashamed to ask questions and I try to give them security and hope.

Also, I have fantastic colleagues, the atmosphere in the Red Cross tent is very good, everyone is involved and works in a spirit of cooperation.

Speaking languages opens personal and work frontiers but, here I am giving back in some way what my colleagues have given me.

Tetiana helping with translation an Ukrainian refugee woman at the Reception center (CREADE) where she works in Alicante, Spain.  © UNHCR/Bianca Rus

As a Hispanist with a passion for literature, who are your favourite authors?

Well, now I'm really hooked on a contemporary Ukrainian writer, Serhiy Zhadan, who posts some verse on Twitter every day. I start my day by looking at his publication; his poems are full of a deep beauty that touches my heart and gives me strength to face the day. As for Spanish writers ... you're putting me in a bind if you make me choose, but I really like reading and rereading Borges. And as for books, one of my favourites is “Platero y yo”, by Juan Ramón Jiménez; he describes the donkey so well that it seems you can caress it and it relaxes me a lot. Another author who has influenced me the most is Calderon de la Barca with "La vida es sueño" (Life is a dream); when I go to Madrid, I love to go to the Plaza de Santa Ana to pay my own tribute to Calderon de la Barca and take a selfie next to his sculpture. I already have a lot of photos!

We could talk about Spanish literature until dawn, but apart from literature, let me tell you that in my house we have also incorporated Spanish gastronomy for many years and we prepare tortilla de patatas (Spanish potato omelette) and zorza gallega (marinated pork stew with potatoes), which we love.

And if you could make a wish?

No more war, no more killing, we can go home and rebuild the country. I want to go back to my old life, to my routine. I want to return to Spain to participate in the congresses again, to have some beers and tapas with my friends, to take another selfie next to the sculpture of Calderón de la Barca; but to live ... I am a Hispanist, but I am Ukrainian, and I would love to go back to live in my country, Ukraine.