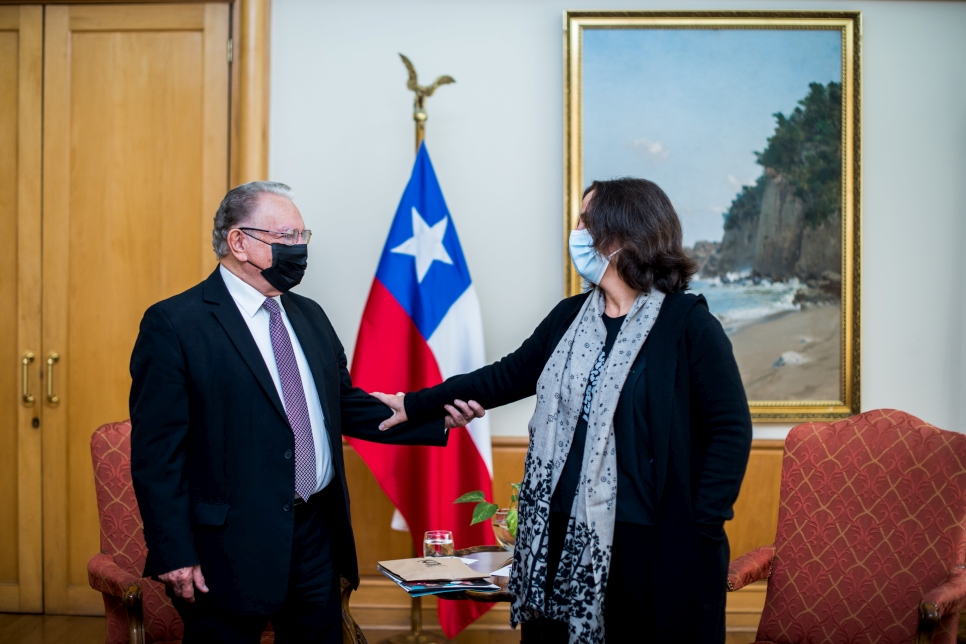 SANTIAGO, Chile – This week, an international delegation – composed of Mr. Eduardo Stein, Joint Special Representative of UNHCR and IOM for Refugees and Migrants from Venezuela, Mr. José Samaniego, UNHCR Regional Director for the Americas and Mr. Diego Beltrand, Special Envoy of the Director General of IOM for the Regional Response to the Venezuela Situation – carried out a mission to Chile with the objective of contributing to the search for solutions for refugees and migrants from Venezuela. This is the first visit of this kind since the inauguration of the new Chilean government, led by President Gabriel Boric.

The Resident Coordinator of the United Nations System in Chile, Ms. María José Torres; the Head of the UNHCR National Office in Chile, Ms. Rebeca Cenalmor-Rejas; and the Head of the IOM Mission in Chile, Mr. Richard Velázquez, accompanied the delegation, whose purpose was to address the challenges identified by the Government of Chile as priorities in terms of addressing the situation of human mobility and the needs of local authorities, thus reaffirming the commitment to support and work together for the benefit of both refugees and migrants, as well as the communities receiving people from Venezuela.

During the visit, the delegation met with Ms. Antonia Urrejola, Minister of Foreign Affairs, and the Minister of the Interior and Public Security, Ms. Izkia Siches. The delegation also met with different governmental authorities involved in the matter, including the National Migration Service, the General Directorate of Consular Affairs, Immigration and Chileans Abroad, and regional and municipal representatives.

The delegation also met with civil society organizations and partners of the Regional Inter-agency Coordination Platform for Refugees and Migrants from Venezuela (R4V) in Chile, as well as with refugees and migrants who have settled in the country, who shared their experiences with the visitors.

UNHCR, IOM and R4V Platform partners will continue to support Chilean authorities and other countries in the region who have received people from Venezuela with solidarity.